‘Without a gender (nongendered, genderless, agender; neutrois); moving between genders or with a fluctuating gender identity (genderfluid); third gender or other-gendered; includes those who do not place a name to their gender.’ 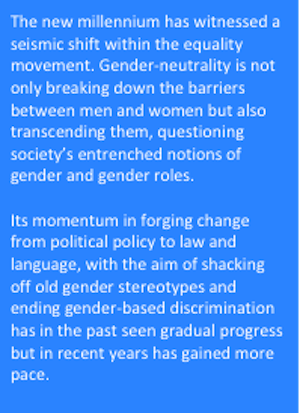 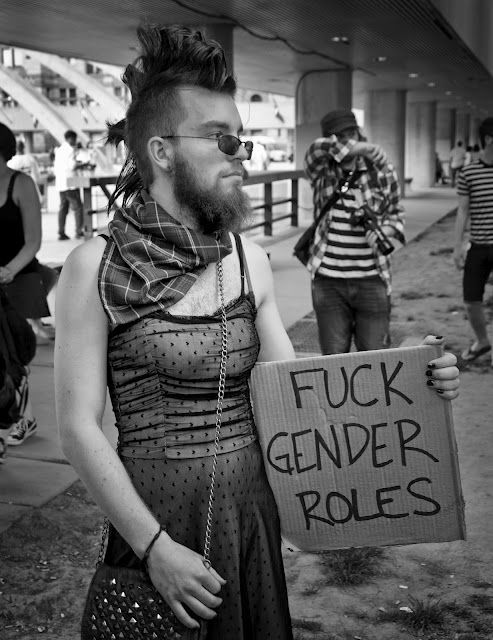 In a generation more at home with the concept of gender fluidity than ever before, businesses and public services are realising the importance of catering to a gender-neutral audience so it is no surprise that fashion, with its reputation as a progressive creative medium, is wholeheartedly embracing this new age of Agender. 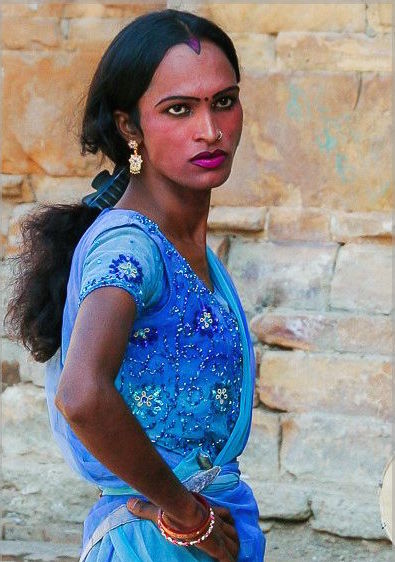 For an industry that has both influenced and reacted to the zeitgeist as well as remaining a principle agent for self-expression, this new chapter in the equality movement is an ideal time to position fashion as an empowering force. However, like many other industries, fashion in particular has multifaceted motives for joining the gender-neutral equality crusade.

His n’ Hers – the evolution of Unisex fashion

Before ‘genderless’ there was ‘unisex’, a term most commonly employed to describe clothing ‘suitable for both sexes that allowed men and women to dress in a similar way’. For women in particular, the adoption of a unisex aesthetic was initially controversial, yet a combination of practicality and social acceptance led it to become omnipresent in women’s fashion. The current rebranding of ‘unisex’ as ‘genderless’ is arguably the natural progression but it also offers fashion an opportunity to showcase itself as progressive while reigniting and in turn, increasing profit from a now ubiquitous sector. 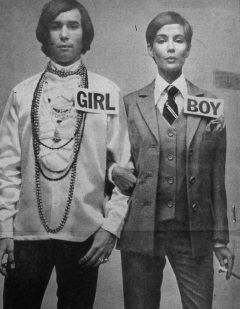 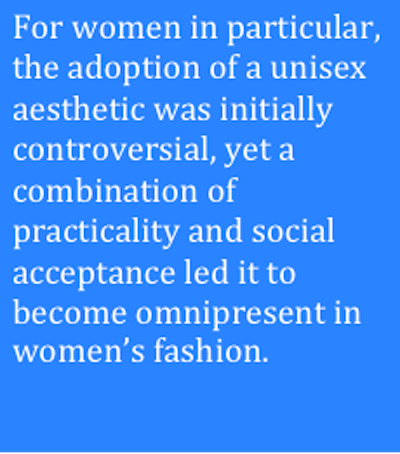 Though the term ‘unisex’ was first coined in the 1960s, the Clothing Reform movement of the 1850s was instrumental in relieving women of the burdens placed upon them by their fashions. For centuries, the old notions of men and women being distinctly different in terms of physicality, psychology and intellect made for very rigidly prescribed gender roles, which in turn, were reflected in the forms of dress to which both sexes were expected to comply.

The Clothing Reform set out to introduce infinitely more practical, less restrictive and therefore more male associated dress codes into women’s attire, aiding their progression in society through more active participation. Closely intertwined with the women’s suffrage movement, these reforms not only broke down the physical barriers to women’s advancement but a visual blurring of gender lines also served to assimilate women into a man’s world. 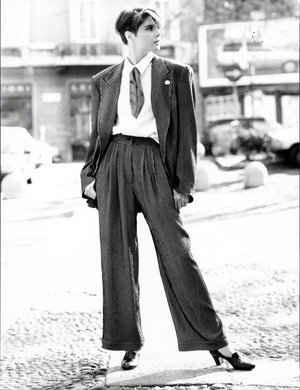 While unisex dressing retained its feminist roots, women entering work also found it necessary to adopt a more masculine approach to dress in order to garner the respect and authority required to compete on a level playing field. Advice tomes such as John T Molloy’s ‘Dress for Success’ outlined the importance of clothing in business and in assimilating the style of current employees in order to achieve. Molloy candidly acknowledged that in the male dominated workplaces of the late 1970s, female applicants would automatically be at a disadvantage. The popularity of ‘power dressing’ amongst career women in the 1970s and 80s clearly illustrated the need for women to disassociate themselves from the subconscious gender associations attached to fashion that could hinder their careers. The sharp suiting and bulky shoulder pads that defined a decade closely resembled the attire of their male counterparts with any feminine aspects reduced to armour-like elements, amounting to what is essentially a disguise to help women ‘fit in’.

In that case it would appear that unisex fashion is an oxymoron, a practical solution to a problem no doubt, but one that does not really address or challenge the gender stereotypes laid down by society. Despite its equality movement origins unisex fashion has not been without its critics. An equally apt definition would be that it is ‘the adaption of clothing entirely male in origin’ and therefore it could be argued that unisex clothing is responsible for not only upholding these stereotypes, but also unwittingly continuing to perpetrate a negative view of anything overtly feminine.

As long as unisex fashion continues to draw on all things male as a basis, it can never be truly ‘equal’ so in many respects the genderless clothing rebrand is the opportune moment to address these disparities by introducing adaptations of more female orientated items into mainstream fashion. As a creator and an innovator, the industry is perfectly placed to do so but the recent crop of genderless initiatives do not necessarily bear this out.

‘Non binary’ fashion – a profitable promise for the future? 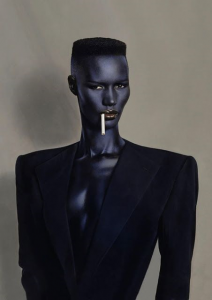 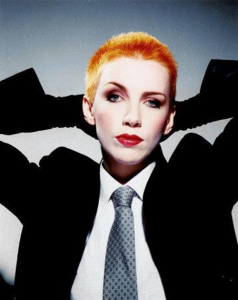 A browse through the gender-neutral rails on the high street reveals that many of these collections, from the likes of Zara or H&M, are simply a repackaging of unisex basics, consisting of little more than a range of oversized t-shirts worn by a suitably androgynous model.

Critics have opined that the industry’s approach is another example of a style over substance approach to a potentially significant social revolution, reducing the equality movement and the debate surrounding gender to a mere marketing ploy that is reliant on presentation and promotion rather than challenging a design-led product. Likewise the combining of male and female runway collections appears to be as much about taming spiralling industry costs as it is about the cross-pollination of the genders and uniting them on a single platform and though the SS18 Men’s Fashion Week events generated headlines for the preponderance of female inspired fashion worn by male models and despite the likes of Katherine Hamnett, Rick Owens or Rad Hourani producing collections that harmonise and hybridise traditionally male and female garments for some time, commercial clothing still seems to be immune from this particular catwalk trickle-down effect.

The most noticeable misstep made by the industry was US Vogue’s August 2017 cover, featuring Gigi Hadid and Zayn Malik. Described in the piece as ‘breaking gender codes’ the couple were pictured wearing masculine tailored suits and discussing borrowing each other’s clothes.

Not only did the magazine spark anger for it’s rather flippant attitude toward those who genuinely identify as gender-fluid, the implication that it also requires women to adopt male attire rather than take the more challenging but certainly more equitable approach of putting Malik in a skirt is a prime example of the genderless fashion’s perceived inequality, the same critic levelled at its unisex predecessor.

On the positive side, the Selfridges Agender concept, a single space free of gender assigned products that brought sexes together, floated the idea of consumers choosing fashion items based on personal preference rather than gender specifics. They stocked collections from a range of designers known for their gender-neutrality and started the conversation not just on the clothes themselves but the way in which men and women thought about and shopped for fashion.

The fact that the space was only temporary is unfortunate. The opportunity to provide safe spaces for those identifying as gender-neutral or gender binary on a permanent basis would have made a bigger impact on the current retail model with its pop-up status potentially giving the impression that the fashion industry sees gender-neutral as just another flash-in-the-pan trend rather than a real movement deserving of being taken seriously.

Conversely John Lewis’s recent gender-neutral overhaul of their children swear department illustrates a certain amount of readiness among retailers to make a change and although responses were mixed, it has perhaps encouraged other outlets to consider how they would provide a more equitable service and product range.

Overall, despite sparking healthy debate into society’s views on gender, the current ‘agender-lite’ attitude does a disservice to both the industry’s potential for creative visionary and the important role that unisex fashion has played in the lives of women and the role it could potentially play in the lives of every gender identity. In the same way that the mini skirt came to signify sexual liberation for some but a despised symbol of patriarchal society for others, continuing failure to address thesecriticisms could be the downfall of the unisex rebrand. If the fashion industry cannot be bold and show a genuine commitment to positive change could we see gender-neutral fashion become the next pariah of the equality movement?