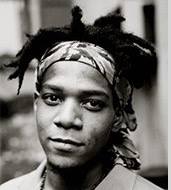 WHY WE ARE INSPIRED: A contemporary and close friend of Andy Warhol, Jean Michel Basquiat was a true maverick of his time, refusing to be pigeon-holed and confined to just one art form, he was a poet, a musician and a graffiti artist. All of which fed into his influences that created explosive works so raw with character, style and expression.

Basquiat’s nascent career coincided with the advent of a major shift in the artworld from Pop to Neo-expressionism, a new bohemia with a wild nexus of music, fashion and art, ushered in Punk and New Wave movements which created a whole new state of mind.

What radically changed the art world by the time Basquiat entered the scene was money. In the early 1980s, Wall Street’s bull market engendered an interesting offspring: Soho’s bull market. The new money of the eighties was increasingly invested into art. By 1983, the art market in New York alone, was estimated at $2 billion. Gallery dealers became power players, barely distinguishable in lingo and lifestyle from their Wall Street clientele. Banks began accepting art as collateral for loans. Corporations began stockpiling important contemporary-art collections. Every weekend, Soho was clogged with a parade of art lovers slumming at openings. At auction houses, packed rooms applauded as records were set for everything from van Gogh’s “Irises”$53.9 million to $17 million for “False Start” by Jasper Johns. 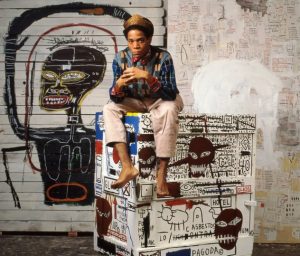 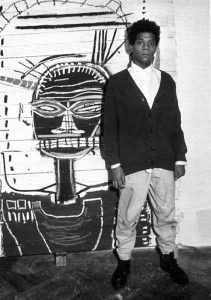 Being an artist of Afro-Caribbean decent, with Hispanic roots through his mother, Basquiat’s black identity is manifest throughout his art. Although not overtly political, his sense of what it means to be a black man in contemporary America couldn’t be more clearly conveyed, whether it’s in the grinning heads in “Hollywood Africans,” or the poignant tribute to his idol Charlie Parker, “Charles the First” or the ironic “Undiscovered Genius of the Mississippi Delta.” 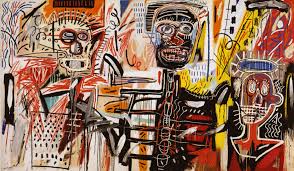 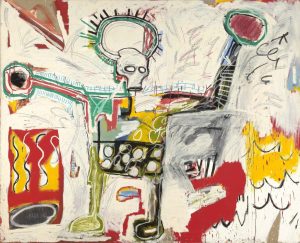 Many of his stylistic trademarks such as the heavy colour collages, intertwined with black lines and scribbles with heavy limbed figures caught in a moment of absolute emotion are themselves a recognisable part of the of the well-established African-American aesthetic tradition. Not to mention the iterated drumbeat brought here by men sold into slavery, to the call and response of gospel, the repeated blues refrain, jazz’s improvisational rifting, and the sampling technique of rap. 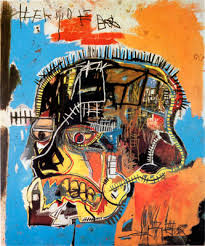 Moreover in the paintings themselves, boys never become men, they become skeletons and skulls. Presence is expressed as absence whether in the spectral bodies and disembodied skulls or the words he crosses out. Basquiat is obsessed with deconstructing the images and language of his fragmented world. 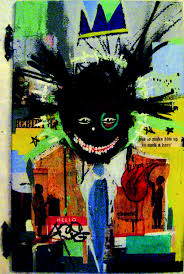 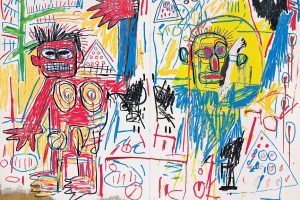 Above: Untitled (Diptych) 1982 by Jean Michel-Basquiat

It is no wonder his work became so popular amongst cultural icons. In the last year alone pieces have been sold from the collections of David Bowie and Johnny Depp fetching millions at auctions.

Above: Untitled 1982 by Jean Michel-Basquiat

Earlier this month Japanese billionaire Yusaku Maezawa, Founder Zozotown helped set the record for the highest sold piece by an American artist with Basquiat’s work ‘untitled’ bought by Maezawa, for $110.5 million. Art is, of course subjective, but you don’t reach the big time, selling pieces at such prices without some serious ‘steal appeal’. For the masses who enjoy his work both during his time and after however, it is difficult to put a price tag on the kind of things he felt, thought and promoted. 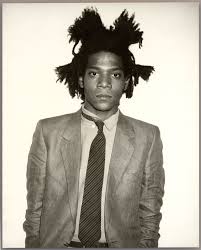 Above: Photo of Jean Michel-Basquiat 1981

Inspirational characteristics – Though he died very young (27 years old) almost far too soon from unveiling his full talent, Basquiat goes onto inspire a whole new generation of creatives with his effervescent brilliance, fearlessness and his radical approach to disseminated the traditional structures of an elite art world. For that you will always be present in our work.

WHERE TO SEE THEIR WORK: He is often featured in his own shows in his hometown of New York so make sure to look him up if your ever in the big apple. In the UK his works feature in a showcase at the Barbican later this year: Basquiat Boom for real