Failure in Fashion Article for ‘Not Just a Label’ 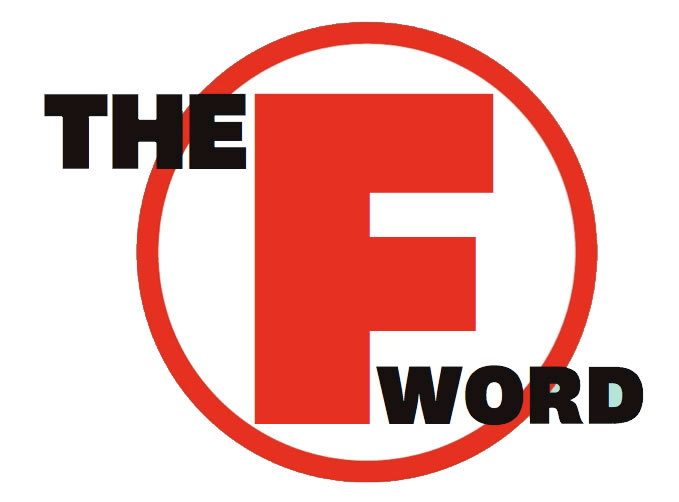 The drive to succeed – and to do it quickly – can leave emerging fashion designers feeling disheartened when their dreams of success fail to materialise. Nazinna Douglas, the young fashion designer behind the label AlphaOmega London, argues that efforts must be made to inspire young hopefuls to believe that failure is not an end-point, but a prerequisite to success…

Thomas Edison, inventor of the first commercially viable electric light bulb, was once asked, “How did it feel to fail 1,000 times?” His response: “I didn’t fail 1,000 times, the light bulb was an invention with 1,000 steps.”

Whether Edison’s incandescent invention was a series of failures or steps, ultimately, it was his lack of the fear of failure that led him to success.

For aspiring young fashion designers, who, like Edison, have visions of disrupting the landscape of their industry, the desire to succeed and be recognised can become the measure by which they assess their achievement.

Getting it ‘wrong’ and learning from mistakes is a key process on the way to eventual success, yet in desperate pursuit of quick achievement, young designers are increasingly unwilling to follow this trial-by-fire process. And yet, embracing failure can – and should – precipitate success. 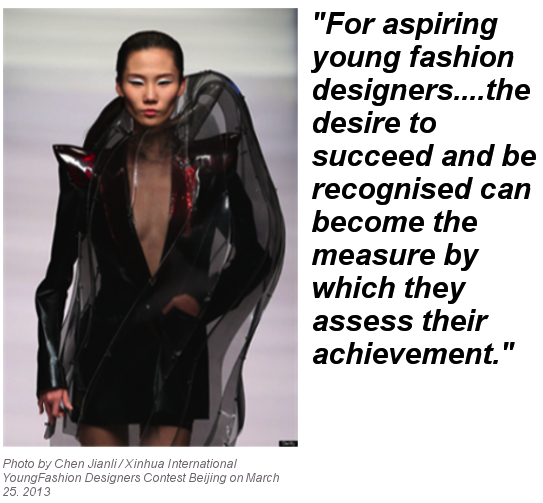 In spite of this, our success-driven society has marginalised failure. We fear failure. Many view it as a deficiency. As children we are taught that mistakes are bad and practice makes perfect, which shapes our quest for perfection into a cause of diminished self-esteem, and generates a greater need to succeed and avoid failure at all costs.

Failure among emerging fashion design businesses in the UK has attracted the attention of the Department of Trade and Industry. A 2012 report commissioned by the British Fashion Council highlighted “high failure rates and the lack of business skills and entrepreneurial training” as some of the key challenges faced by fashion designers and the fashion industry as a whole.

However, the bigger picture suggests that there is less cause for concern. Fashion’s economic and social impact on the UK economy equates to more than £37bn in GVA (Gross Value Added), and the industry employs nearly 1.3 million workers. 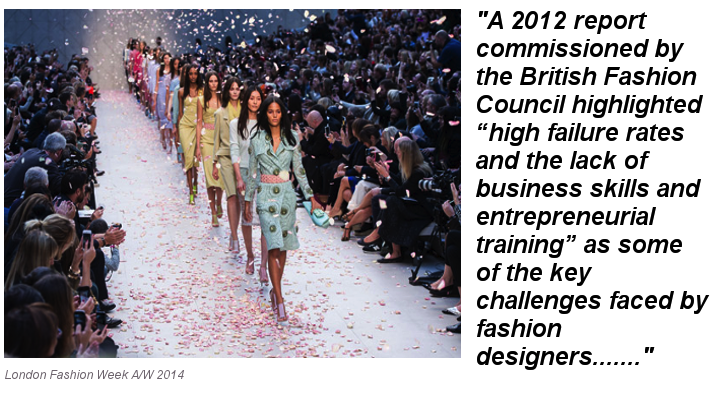 The dynamic and innovative fashion design sector upholds the UK’s position as a world leader in directional fashion. In the absence of robust data, little is known about the current size of the sector. However, figures provided by Mintel (2010) suggest an estimated total consumer spend of £2.5bn on UK designer fashion alone, implying an annual compound growth of over 19.1% since 2001. In short, fashion designers can be big business.

The Allure of the Fashion Designer

The University of Kent’s report on the UK Fashion Industry (2013) showed that there were more than 4,000 textile and design graduates in the UK, competing for around 500 jobs every year. Why, if success in the field is so infrequent, is a fast-growing cohort of students aiming to become fashion designers?

Partly, the increased aspirations in fashion are down to a global rise in demand for luxury goods, driven by an increased interest in fashion on a wider scale. In today’s society, successful fashion designers are celebrated as social, cultural and artistic influencers, who over the years have acquired mass appeal.

In its 2010 career survey, Parsons the New School for Design asked its graduates why they thought others wanted to become fashion designers. One responded: “There are designers who want to be celebrities, there are those who want to be great designers, and there are others who just want to make money.”

Seeking the instant gratification of imminent and abundant success is of course where caution needs to be applied. To address the concerns over rates of failure in fashion design, we must first unlock the social influences that have shaped our restrictive views of success among young designers. 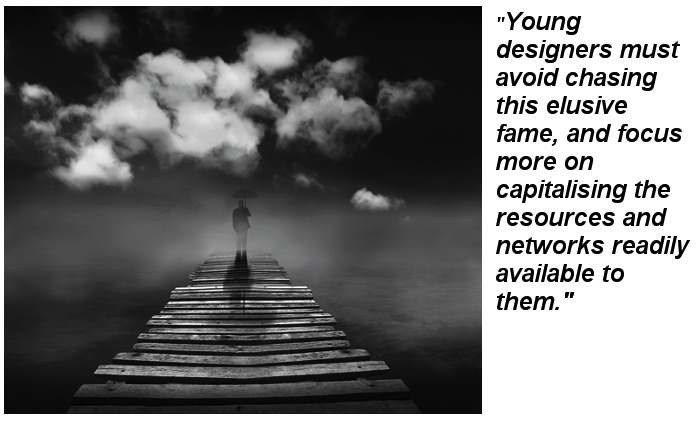 “Only a precious few of us become stars like Lagerfeld or Galliano,” asserts Pierre-Henri Mattout, a French fashion designer who set up his menswear label in 1998. “It is best not to even think about it.”

Daniel Jasiak, for whom personal recognition remains elusive, despite selling to high-end fashion department stores around the globe, also claimed to refrain from believing in Cinderella stories of success. “I make clothes to educate people, not just to make money,” said the designer.

By both accounts, it is evident that in the absence of a lucky break, young designers struggle to harness the power of ‘accumulative advantage’ (where initial success leads to further successes) typically associated with designers from wealthier backgrounds or celebrities who launch fashion careers. Young designers must avoid chasing this elusive fame, and focus more on capitalising the resources and networks readily available to them.

Role models in fashion education may be said to exert influence over students, causing them to develop narrow views of success. Academic programmes that tell students that the conceptual, avant-garde or high-end designer markets are the most prestigious professional goals are deemed problematic by some industry critics.

Awards such as the coveted LVMH Prize help to reinforce this conceptual bias, as its panel of industry luminaries bestows super-brand status upon young designers whose careers, following a LVMH win, are automatically validated by prominent figures within the industry. Do they always get it right? 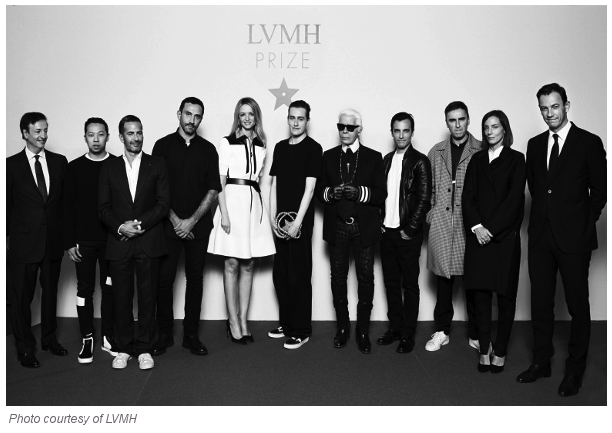 The influence of such prizes on graduates is clear. A study by Tara Gerber and Diana Saiki concluded that graduates were heavily influenced by extrinsic rewards, such as financial success and recognition from ‘opinion leaders’, as opposed to intrinsic rewards – career satisfaction, motivation, integrity, freedom of expression, etc.

Much can be said for the array of talent who aren’t shortlisted or picked as a finalist, and accolades such as fashion prizes arguably restrict a young designer’s understanding of their future options. Many emerging designers’ career goals are concentrated towards very small or niche markets that are highly competitive, yet such awards promote a form of blindness towards alternative professional pathways, assuming there is a lack of validity and creativity elsewhere within the industry.

Want to Succeed? Make your Acquaintance with Failure

In a culture of overnight success stories, it is no surprise that our attitudes towards failure are fraught. Those intent on becoming fashion entrepreneurs in an increasingly complex and volatile industry must maintain an attitude of fearlessness towards failure. It is the act of risk-taking, along with the ability to make mistakes and learn from them, that ultimately garners success.